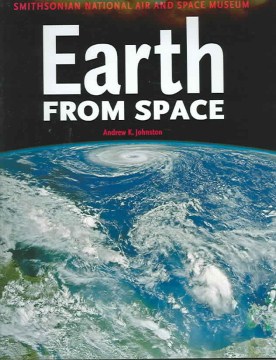 Baker & Taylor
A study of satellite imaging presents a series of photographs that include coastal ports, world cities, and landscapes of wars and demonstrates how satellite imaging works and what it reveals about the human and natural forces that affect the Earth.

Firefly Books Ltd
An examination of how satellite imaging, also called remote sensing, works and a showcase of 300 extraordinary views of Earth. The book includes a brief history and dispels popular misconceptions.

Three hundred spectacular views of Earth taken by the latest generation of satellites.

For orbiting satellites, no place on Earth is isolated. The Himalayas are as easy to photograph as Manhattan. While satellite images are important for science and technical needs, they can also be appreciated for their astonishing beauty.

Earth From Space shows how satellite imaging -- also called remote sensing -- works and showcases some of the most extraordinary photographs ever published.

In the mid-1990s a new generation of satellites began to orbit the Earth. More powerful and accurate than ever, they can record the effects of human and natural forces, and how the planet is changing through time can be clearly seen.

The book also dispels popular misconceptions like those used in Hollywood movies for dramatic effect such as exaggerated surveillance capabilities of orbiting satellites. However, what the satellites do see is nothing short of spectacular.

Earth From Space covers subjects ranging from aeronautics to history to ecology with unforgettable illustrations - an expansive big picture view of the world.

Book News
Satellites hover above us, usually just out of sight. They track weather, commerce, and military maneuvers, but they also reveal how very beautiful we are from so high up. Johnston, a Smithsonian geographer, shows us the hundreds of colors of sand in a desert, the striations that will become more mountains in the Dolomites, the crystalline structure of Everest and its environs, the frozen flow of glaciers, and the startling whiteness of the site that once held two towers in New York City. Johnston explains how these photographs came to be, and is careful to include images of where humans have yet to carve straight lines into landscapes as curving and complex as muscle tissue. Annotation ©2004 Book News, Inc., Portland, OR (booknews.com)

Baker
& Taylor
A study of satellite imaging presents a series of spectacular photographs that include coastal ports, world cities, and landscapes of wars and demonstrates how satellite imaging works and what it reveals about the human and natural forces that affect the Earth, dispelling misconceptions about satellites.