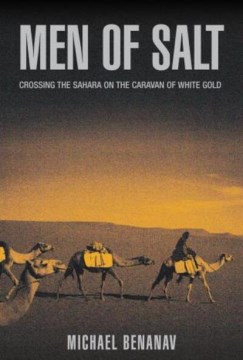 Crossing the Sahara on the Caravan of White Gold

Baker & Taylor
A gripping narrative of the Islamic culture's unique centuries-old trek between the fabled city of Timbuktu and the notorious salt mines of Taoudenni details the trans-Saharan Caravan of White Gold, in which camel drivers march for eighteen hours per day for nearly a thousand miles through sandstorms and searing heat.

Globe Fearon Co
An American''s life-or-death adventures in the salt mines of the Middle East.
Century after century, camels and their drivers have traveled the sands between the fabled city of Timbuktu and the notorious salt mines of Taoudenni, hauling supplies from the proverbial end of the earth to an even farther-flung outpost, deep in Mali''s slice of the Sahara. They return laden with tombstone-sized slabs of solid salt. While nearly all of the great trans-Saharan trade routes have disappeared, the Caravan of White Gold--so called because the salt was once literally worth its weight in gold--marches on, spared by unmatched isolation.

Hearing that the caravans were threatened by the introduction of trucks, author Benanav joined a caravan, becoming one of the few Westerners to do so. He visited the modern city of Timbuktu, a sprawling, dilapidated town of mud-brick dwellings, and haggled to join a caravan to a destination once used as a jail, the salt mines. Following his amused guide, Walid, Benanav lived for weeks among the camel drivers, marching eighteen hours a day for nearly a thousand miles through sandstorms and searing heat.

A gripping narrative of the unique Islamic culture, at a time when Western access to the Islamic world is increasingly limited, Men of Salt is a revelation, and an important addition to the literature of history and of travel.

Book News
After hearing that the last remaining camel caravans were threatened by the introduction of trucks, American journalist and photographer Michael Benanav joined one as it headed into the deadly heart of the Sahara to obtain slabs of solid salt to sell at market. In this accessible narrative, he recounts his experiences among the camel drivers as they traveled for nearly 1,000 miles without a map or visible landmarks, through sandstorms and searing heat. The text is accompanied throughout by Benanav's photographs of the landscapes and people he encountered on his journey. Annotation ©2006 Book News, Inc., Portland, OR (booknews.com)

Baker
& Taylor
Provides a narrative of the Islamic culture's centuries-old trek between Timbuktu and the notorious salt mines of Taoudenni, describing how camel drivers march for eighteen hours per day in sandstorms and searing heat.