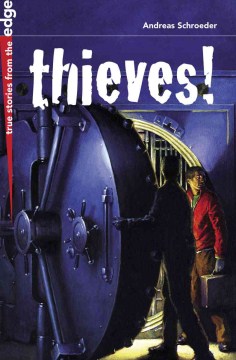 Firefly Books Ltd
Ten exciting true stories of master thieves and their crimes -- these are high stake stories, some successful and never caught, some remarkably inept after their crime, but all good reading.

Of all the crimes that human beings commit, stealing is probably the most common.Thieves!, the latest in the True Stories from the Edge series, brings ten exciting stories of master thieves and their master crimes.

Willie Sutton was casing a bank when he noticed that the manager looked a lot like Sutton himself, so he walked into the vault, loaded up with banknotes, and calmly walked out. D.B. Cooper hijacked a plane, demanded $200,000 in payment, and parachuted from the aircraft. He was never captured.

Other criminals in this book were no less brazen:

Readers will find nothing but high-stakes action in Thieves!. Though many of the bandits ended their careers broke and disillusioned, these impresarios of crime make for great reading.

Andreas Schroeder is a great storyteller and knows how to write for varied audiences. I enjoyed this book even though it is aimed at children; he has written some books for adults with the same themes of criminals, heists, and escapades.

A really eye-opening book to read. Some chapters were funny, some were dark, and some were sad. Though I could only read the first couple chapters, this book could't have gone downhill. It was great.