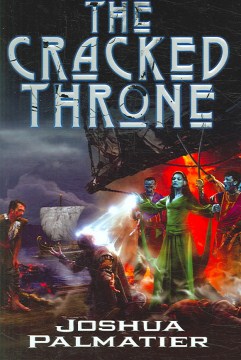 Penguin Putnam
She was a child of the slums skilled in the art of survival...Could she harness that talent to save the city from a fiery doom?

Baker & Taylor
When the mysterious White Fire sweeps through Amenkor for the second time in a millennium, Eryn, Mistress of the Skewed Throne, is submerged in a world of madness, and Varis, an assassin, is forced to take over the throne and save the people of Amenkor.

Blackwell North Amer
Fifteen hundred years ago, the legendary trading city of Amenkor faced a seemingly unstoppable threat that appeared out of nowhere to attack and destroy city after city along the Frigean coast. Only a masterful working of magic could turn back this devastating invasion. And so the Seven Adepts combined their power and knowledge to create the Skewed Throne. Since that time Amenkor had been ruled by the individual who held the Throne, and down through the centuries the city had prospered and that ancient threat had been all but forgotten.
Then, a millennium ago, Amenkor was caught in the White Fire, a mysterious force that swept across the land spreading madness, drought, famine, and disease in its wake. With the passing of that first Fire, the ruling Mistress of the era had been found dead on the steps leading up to the palace. And since that time the city had begun a slow, inexorable downward spiral.
Varis had learned the art of survival as a very young child in the slums of Amenkor. And when the mysterious White Fire swept through the city for the second time in a millennium. Varis had survived that as well. But she had been changed by the Fire's spell, and she was not the only denizen of Amenkor marked by the White Fire. Eryn, Mistress of the Skewed Throne, had continued to reign over the city after the Fire's passing. Yet from that moment, Amenkor's decline had escalated, and Eryn herself seemed to hover on the edge of madness.
As Amenkor continued to deteriorate, Varis came to the attention of some of the most powerful people in the city, people who could see her unique potential. And she found herself transformed from gutterscum to unofficial Seeker to bodyguard to assassin. Yet none of her skills could save her from a destiny she would never have wished for or imagined.
After a confrontation that perhaps no one else could have survived, Varis became the new Mistress of the Skewed Throne. Untrained, unprepared, and not certain who she could trust, Varis took the Throne at the most perilous point in Amenkor's long history. The city was on the brink of starvation, thanks to a fire that had destroyed most of the warehouse district, and the trading ships sent out to bring back the supplies needed to feed the city had disappeared without a trace. And both Varis and Eryn were obsessed with a vision only they had shared - a vision of Amenkor invaded by an unknown enemy, the harbor watch towers destroyed, wrecked ships sinking in waters stained red with blood, even as the city itself was engulfed in flames.

Baker
& Taylor
When the mysterious White Fire sweeps through Amenkor for the second time in a millennium, Eryn, Mistress of the Skewed Throne, is submerged in a world of madness, plunging the city into devastation, and Varis, an assassin, is forced to take over the throne and save the people of Amenkor.