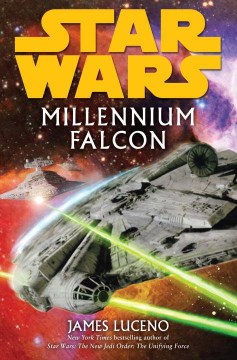 Two years have passed since the defeat of Darth Caedus, the former Jacen Solo. For a grieving Han and Leia, the shadow of their son's tragic downfall still looms large. But Jacen's own bright and loving daughter, Allana, offers a ray of hope for the future as she thrives in her grandparents' care. The eager, inquisitive and Force-strong girl makes a curious discovery aboard her grandfather's beloved spacecraft -- the much-overhauled but ever-dependable Millennium Falcon. Allana's infectious desire to unravel its mystery launches the Solo family into a galaxywide cat-and-mouse game as they head for a fateful rendezvous on Coruscant--at the explosive height of the Republic/Separatist uprising.
Publisher: New York : LucasBooks/Del Rey/Ballantine Books, c2008
Edition: 1st ed
ISBN: 9780345507006
0345507002

Whoever thought up the idea for this book was a genius! And James Luceno was a genius for writing it the way he did. The story makes Han, Leia and Allana’s quest to discover the origins of the Falcon relevant to both the Star Wars canon and the lives of the book’s main characters, in addition to being a fun and incredibly engaging adventure. It also portrays the Falcon as more than just a ship. The interludes, which take the time about Han’s thoughts of the Falcon at different points in time, are well-timed, insightful, and very intriguing. They help us to understand why the Falcon is so important to Han. And it makes a smooth, genuine effort to address the weight of recent events instead of pretending that they didn’t happen, allowing Han, Leia, and Alana the chance to heal. And at the same time, it sets up for the next chapter in Legends history. My one complaint is a very minor one; switching writing styles after the Legacy of the Force was a bit of an adjustment. I give this book a ten out of ten for being the book that fans wanted, but still amazing.
@R2-D2 of the Hamilton Public Library's Teen Review Board

Overall, I enjoyed this book, however I did not get around to finishing it. The story does not flow as easily as other books by the same author, but it did offer interesting insight into the origin of the Falcon. A good read if you are wanting some backstory, but a little too jumbled to hold my interest.

I didn't think I was going to like Millennium Falcon when I first started reading it. It felt a little messy and not as well written as some of James Luceno's other Star Wars books. I was also a little confused at first with all the time line changes. But, after finishing it, I can say that I actually enjoyed reading it.
I probably liked coming across all the mentions and references to other Star Wars books the most, especially the Han Solo and Lando Calrissian Adventures which are oddly never mentioned in other E.U books. It was also interesting to see where the journey of finding the Falcon's previous or newer owners led the characters, and was cool when they finally met up and had to work together to find the treasure.
The treasure at the end was definitely a surprise because it's not what you expect it to be, and it leaves you saying, "Wow... Really? Okay..."
The time line changes at the beginning all make sense in the end, and all the loose ends are tied up. The ending of this book is a perfect lead into Outcast, the first book of the Legacy Of The Force series.

I was lost between generations and story is confusing. It has no correlation with comics and films or series. Just jumbled up events. Recommend AVOID.

Complete garbage in every way. This is not Karen Travis, folks (author of the truly excellent republic commando series, among others). I don't know whether the author is completely talentless or he just mailed it in because it was a hired gig. But either way, this novel is.. How shall I put this? It's pure excrement. As in stinky poop. It's bad. It's really bad. It has no redeeming qualities. How and why is it bad? Let me count the ways. A ridiculous premise, a poorly-executed exploration of that premise, characters who are not introduced in any meaningful way, no emotional content for the reader to latch onto, and a completely anticlimactic "treasure" at the end. When the treasure turned out to be what it was, there was a brief moment of hope, despite the fact that it hadn't been set up earlier. I though Ah, here's a chance for the author to redeem himself with the character's reaction to it. He could explore the the naivete of those who thought this republic symbol would somehow have changed the course of history, had it been found. But no. Nothing. Just emptiness. If you've read this entire review you may be determined enough to finish it, like I was, but you will find yourself disappointed at every turn.

One of Luceno's better SW books, but the climax really ruins the experience, it's so bad.

Chinderixx thinks this title is suitable for 14 years and over

SUMMARY FROM WIKIPEDIA:
Much of the novel delves into the long and exciting history of the Millennium Falcon, as it had been called many names and had many intriguing adventures, from the time it came off the assembly line almost like a wild animal, to when it became the magnet in attracting the adventures of the great Han Solo.
In 19 BBY, during the Clone Wars' Battle of Coruscant, the Falcon had gone under the name of Stellar Envoy under the captaining of Tobb Jadak and his copilot Reeze Duurmun. Jadak and Duurmun had acted as conspirators as part of a plot to overthrow Supreme Chancellor Palpatine as leader of the Old Republic. Their mission failed when an erratic hyperspace jump landed the Envoy into an accident that killed Duurmun and landed Jadak in a coma that lasted for more than sixty years. By 43 ABY, two years after the end of the Second Galactic Civil War, Jadak awakens, having barely aged since his time in the coma. And with the help of ne'er-do-well Flitcher Poste, they work their way forward in time from 19 BBY in order to find out what happened to the Stellar Envoy.
Meanwhile, the Solos discover a mysterious object aboard the Millennium Falcon, and they decide to go on a fact-finding mission in order to discern the Falcon's origins. They work their way back in time from when Lando Calrissian first owned the ship until they eventually cross paths with Jadak and Poste. Jadak reveals that the mysterious object in the Solos' hands will lead them to a treasure on the world of Tandun III, which was meant to overthrow Palpatine. On their heels is Lestra Oxic, a mysterious businessman who wants the treasure.
When all of these parties arrive on Tandun III, they find that the planet has undergone an apocalypse thanks to the Yuuzhan Vong invasion that was wrought upon it years earlier. They discover the treasure, but it turns out to be a fake. Oxic then hires Jadak and Poste to help him find the real treasure just as the Solos escape with the other parties from a collapsing Tandun III. They all make it out in time and the planet explodes with no one dead.
The novel ends with Luke Skywalker calling the Solos to come back to Coruscant because Galactic Alliance Chief of State Natasi Daala had Luke arrested for lack of action in defeating Jacen Solo in the first place during the Second Galactic Civil War. And so the Millennium Falcon flies back to Coruscant.