Saved Searches Advanced Search
The San Mateo Public Library is closed.  An opening date is yet to be determined. For additional Information Click here.Please note that there may be a delay in items being cleared from your account. The Library currently quarantines returned materials for a minimum of 96 hours. No overdue fines will be accrued during that time.
Print 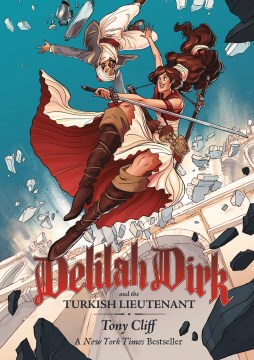 Delilah Dirk and the Turkish Lieutenant

"Lovable ne'er-do-well Delilah Dirk is an Indiana Jones for the 19th century. She has traveled to Japan, Indonesia, France, and even the New World. Using the skills she's picked up on the way, Delilah's adventures continue as she plots to rob a rich and corrupt Sultan in Constantinople. With the aid of her flying boat and her newfound friend, Selim, she evades the Sultan's guards, leaves angry pirates in the dust, and fights her way through the countryside. For Delilah, one adventure leads to the next in this thrilling and funny installment in her exciting life" -- from publisher's web site.
Publisher: New York : First Second, 2013
Edition: 1st ed
ISBN: 9781596438132
1596438134
9781480627215
1480627216

Fun graphic novel about adventure finding you when you least expect it. Ergemoglu Selim is a Turkish soldier who isn't much good at actual soldiering, though he does brew excellent tea. In Constantinople in 1807, that's not a recipe for career success in the military. Selim has at least one other skill, speaking English, which brings him into contact with adventurer and thief Delilah Dirk. She's imprisoned, he's assigned to question her... which somehow ends with his head on the chopping block, accused of abetting her escape. Spoiler alert: he gets away.

The book is named for Dirk, and she is a kick-ass woman with awesome hair that defies the laws of physics. Selim, though, is the narrator and the heart of the story. She's the impetuous adventurer, he's the realist. It's not an odd couple dynamic, but a complementary pair of friends who didn't know how much they needed each other until they met. She brings him out of his shell, and he finds his place in the world.

Had a great time reading this and the sequel!

A fun romp of a graphic novel!

A worldly and roguish young thief plots her next great heist from a powerful sultan in Constantinople. Full of swashbuckling fun for any kid who has played at pirate hunter or Indiana Jones.

I met Delilah and Selim and feel in love with them almost instantly. The writing is sharp and full of personality. I just loved the banter between the characters. The art is also beautiful to look at. Each panel is like its own small work of art. Tony Cliff does a fantastic job of marrying his writing and his art in order to create something interesting to look at.

This first book feels a lot like an introduction to a larger story and I'm looking forward to seeing if #2 brings the story to fruition. It's also always great to support a emerging Canadian creator. Vancouver represent!

Right after meeting Delilah Dirk, a sparky, sarcastic person, I was hooked. WHY aren't more people reading this?!

Reviewed in the Stratford Gazette, August 2016

The art is fantastic in this little graphic novel adventure story! The facial expressions of everyone in the frame is spot on and very funny. Mr. Selim is as enjoyable a character as Batman's Alfred and move over Han Solo because Delilah Dirk is my new favorite rogue!

Tony Cliff tells the story from timid Selim's point of view, helping to make Dirk's escapades even more daring by comparison. Cliff's artwork, most notably his use of color, beautifully complements the Turkish setting.

Good action, powerful heroine, but the story felt like it lacked plot. The drawing is good but not my favorite style. I might read the next one that comes out to see where the story could go, but it did not grab me like I expected.

is one of those graphic novels that is pure fun. The art was lush with vibrant color and fun background details, there were hilarious little onomotapeias scattered throughout, and the characters were charming. Delilah Dirk is the swashbuckling protagonist who turns every gender-based trope on its head. Selim plays the straight man, full of culture and earnestness. It's hard to say which character I loved more, but I will definitely be reading the rest in this series, when they come out.

A worldly and roguish young thief plots her next great heist from a powerful sultan in Constantinople. Full of swashbuckling fun for any kid who has played at pirate hunter or Indiana Jones.

Constantinople, 1807. In the service of the Sultan, supreme leader of the Ottoman Empire, Erdemoglu Selim must fight for his wages – not ideal for a man more romantic philosopher than warrior. He is called upon to interrogate a foreign prisoner, a woman, no less, named Delilah Dirk, but then is accused of being in cahoots with her plan to steal ancient scrolls from the Sultan’s library. Selim is saved from execution in rather spectacular fashion by the same Delilah Dirk, who did indeed come to steal some ancient scrolls and they make a hasty escape in her flying boat before heading off to their next adventures.

Selim’s superpower is making superb tea and the ability to reason. Delilah’s superpower is everything else – archery, swordswomanship, picking locks, acrobatics, flying boats. They both have an overwhelming sense of honour, too, but in an interesting role reversal from most swashbuckling narratives, Selim honours his debts and gains even more wisdom, while Delilah is slightly more egotistical; she will fight to the death anyone who insults her reputation.

Canadian author / illustrator Tony Cliff began this graphic novel series online, and it moved into print in 2013. It and its sequel (Delilah Dirk and the King’s Shilling, released in 2016), have rich sepia-toned, witty illustrations (really, the scenery is quite breathtaking), distinct characters, and bantering dialogue full of irony and bombastic action. The historical setting appears to have been thoroughly researched - this is Jane Austen’s Regency period, but with some fairly significant twists. The plots are character-driven but daring and heroic, with very little blood depicted, making this a graphic novel series to be enjoyed by tweens, teens and adults alike, especially for anyone who likes resilient female characters. Delilah is a strong-willed female character whose flaws are obvious; however this makes her potential for growth nearly endless.