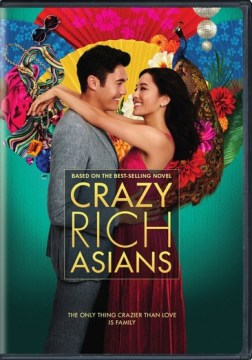 If you liked My Big Fat Greek Wedding, or Monsoon Wedding, add this one to your list. Such a fun movie with family members that I think everyone can relate to. I also loved that the city of Shanghai is an important character in the movie.

Entertaining rom-com. Watching it has made me add reading the next two books in the triology to my 'to-read' list when I'm looking for some light-hearted, easy fiction.

More like a fantasy and dream. I came from SouthEast Asia. Can tell you it is not real to be that rich in Singapore. I love the look of the lead actor and actress, but tired of Michelle Kwon.

Ugh. Unoriginal plot, shallow characters, nothing enjoyable about it.

I enjoyed this non serious movie about the rich and the poor. The first surprise to me was how well most of the actors and actresses spoke English as I would expect accents since the movie was suppose to be placed in Asia. I also liked the character of the side kick of the crazy friend of the main character. She was so outspoken as well as the rest of her family but sincere with friends. She had an energy to her character and spoke perfect English without any accent. I found it to be completely entertaining if you did not take the movie seriously.

Crazy Rich Asians, the movie directed by Jon M. Chu is about a woman named Rachel Chu. She is dating Nick Young and decides to accompany him to a wedding in Singapore. What she doesn’t know is that Nick’s family is incredibly wealthy and they’re very famous. On the trip, Rachel learns that she has to deal with all of the problems in her way now, especially Nick’s mother. The Crazy Rich Asians Film is probably one of the best movies I’ve ever seen. The cinematography of the movie is beautiful. The editing of all the scenes is very cool and something I haven’t seen in any other movie yet to date. The actors in the movie played their roles very well and I felt like the movie stayed true to the book. The movie took the characters and made them even more three-dimensional than they already were and delivered a great job. I give the movie a 5/5. @CreativityReader of the Teen Review Board of the Hamilton Public Library.

The movie “Crazy Rich Asians” , directed by Jon M. Chu was released in theatres in 2018. This movie was based on a book that was based on the director’s (Jon M Chu) upbringing. This movie is interesting because of all of the Chinese family traditions , and how the family interacts with each other along with the traditions. The comedy in this movie really got my attention. I liked that it does contained many situations that are challenging for the families, like having kids study outside of their home country and wanting them to come home to run a family business and giving a deadline to their return, and judging anyone's new boyfriend or girlfriend until the family is won over. The movie shows that the main characters do not really care about the expensive things and everyone in the end cares about their relationships and goals. The movie gets you interested from the beginning. I like that I learned more about Asian culture after the movie but also the content. I would rate this movie 5/5 stars for being funny, appropriate for family with just enough jokes for parents. Over all just a great movie and I loved it. @Bluemlk of the Hamilton Public Library Teen Review Board

I dont know what all the fuss was about this movie. Its not that good. I have seen the same storyline several times. Must have received extra publicity because it was an Asian movie and they wanted to acknowledge that.

Blech. Rom-Coms. This was pretty bad.

Many quotes in IMDb already, thanks to the contributors, including this one:

Eleanor Young: There is a Hokkien phrase 'kaki lang'. It means: our own kind of people, and you're not our own kind.
Rachel Chu: Because I'm not rich? Because I didn't go to a British boarding school, or wasn't born into a wealthy family?
Eleanor Young: You're a foreigner. American - and all Americans think about is their own happiness.

Sexual Content: Some scenes where something 'almost' happens and some innuendos.

Coarse Language: There is some strong language. B-word, A-word, S-word...

Chinderixx thinks this title is suitable for 17 years and over

She asked do they know them they said they did and a guy was taking a picture of her on his phone when she asked she going to his house looking like that wairing that i was like i said whats wrong with that dress so she took her to put on Nick dresseies and my brother said sounds like kate from Arthur i evan notiecd and when i looked at her friends shirt i said she has a dog shirt what i mean i have a swether zipup with dogs and pants that go with it i got it from Justic i didn't see a backpack with eyes in theathers untill now i think they laughed eatting an apple she said witch why tonight you do not need to look like Sebastian from The Little Mermaind they laughed you know little crab guy i said i have that movie she said this guy is sleeping they laughed they laughed she said we came in piecae it remines me of toy story then she said hes on the phone hes on the phone is that a gun kniif and a asian batchlor thery laughed so did my brother as they were kissing she was trying to get his attentin they laughed and said her name and he asked if she like to stop for some dinner she said no she hasdinner planes then she said yeah f word come to dinner they laughed they laughed she had dresses in her trunck and one said walk of shame and she asked you have a hotel dresser in your trunk i'm not an amanial Richail they laughed when she said dame nick this si a party thught when he said the bathrooms are upstars she can change in there her friend said ok fine and she went upstars but he was talking to her i said and they laughed how she was walking up the stars and made pictures of herslef they laughed she took a bowl and was about to drink it and he said its for her fingers they laughed when she said A Giant Tiger i was thinking of the store mascost but it wasn't my brother laughed when he saw it people did too i did aswell and he said Asterd and i we use to hide cigerettes in his paws they laughed when she pulled his mom toward her so fast everyone laughed and i barrowed the dvd from the library now it remines me when i was in Poland i was about to leave outside my costins house i shock my costins hand then i pulled him toward me and gave him a hug everuone was watching and his face turned red her face never truns red when i'm arowend him only when thers a lot of people and his name is Christhper she said her mom didn't evan go to college i did Assumption College and i did go to college coople times in 2016 when he said this is his wife Fieona i said hey like from Shreck we have the 2ed one on vhs and dvd that we got for a brithday party in 2005 i ment 2004 and Feona is also from A Cinderella Story you know with Hilary Duff and he said toy boy Mickey i had Boyfriend name Micheal he was prentending to like me in gr. 7 and gr. 8 later in gr. 8 i thought he really liked me but he didn't in June i stoped talking to him i evan think in may too i think in may too i think they laughed he asked can i punch him in the face thats what my old friend needed for laughing at me and cheating on me her moms single i don't think they are cheating on me and she said Camberge we go to Camebrige they laughed he said thats his nanny not his grandma i said uhoh i think shes gonna bug him when she said she fairwell get a fork cause she forgot i said what she forgot a fork how can you forget a fork but he went to get himslef then she heard the phone i said uhoh this can't be good and she called him him and picked it up and the text said the bed feels empty without you i thought she wanted to spill wine on him not by accent when her friend said i heard you thought alma was the cook ah and he said on the bright side you are the talk of the party then her friend said she did that i belevie people laughed when he said camberffon going she asked why would they wonna bye a camboreongoing and it gonged